Scope: The position of Treasury Advisor and the election of yieldchad to that position. This proposal also further includes risk disclosures.

Snapshot
to be added

Provide a High Level Overview: Yieldchad was recently elected to Treasury Manager. However, in order to reduce liability for the treasury and for yieldchad himself, it was agreed that yieldchad would withdraw from the TM position, and instead apply for an advisory role.

The idea of the Treasury Advisor is simple - the TA will look after treasury operations and advise on how to deploy the capital, while the relevant DAO representatives (potentially the Treasury Committee as laid out in WIP 15) makes the ultimate decision on whether or not to invest. Ultimately, the TA is expected to develop and suggest investment strategies, protocol partnerships, and generally look after the wellbeing of the treasury.

The TA will submit monthly reports detailing strategies deployed by the Treasury.

The role of TA will be similar to that of Treasury Manager, with a few key differences:

The TA will be expected to:

The TA will serve an initial term starting from the end of the snapshot vote (if elected) until 31 December 2022. If no proposal to replace or remove the TA is made by 15 December 2022, the Treasury Advisor’s term shall be renewed on a rolling basis thereafter for 6 month periods.

If the TA is deemed unnecessary by the community, the TA will resign before his tenure ends per the results of WIP voting to end his term early.

As TA, I will suggest strategies similar to my proposal outlined here: [RFC] - WTM - yieldchad

Total Compensation for the Treasury Advisor = Performance Fee - Base Salary

The Treasury Advisor will receive a base salary ($3,500 per month) which is deducted from a Performance Fee. Performance Fee will be calculated as the profits generated by any TA advised strategy during the quarter, as shown in the below excel spreadsheets. Profit calculations will be made from the earlier of the start of any strategy and 00:00 UTC on the first day of the quarter, and end at 23:59 UTC on the last day of the quarter. Payments for compensation will be made for the previous quarter on the first day of each new quarter. Payments will be made in USDC.

The allocation amount used shall be the time-weighted-average cost basis for new strategies, or value of strategy at the beginning of the quarter for existing strategies, for all strategies under the TA’s advisement.

Compensation will be calculated on strategies advised by the TA, defined as any strategy which was submitted to a vote by yieldchad to the relevant DAO representatives, passed the vote, and was executed. Strategies advised by yieldchad before his potential tenure as Treasury Advisor will qualify as eligible for compensation only from the time period that yieldchad’s tenure as TA commences. Fair valuation of illiquid investments such as locked tokens shall be agreed between the TA and the relevant DAO representatives. If allocation under advisement is less than $25mn, it shall use the same hurdle and compensation rates as $25mn allocation.

The objective of the Compensation Package is:

The community has chosen the below compensation package based on feedback in the RFC proposal. 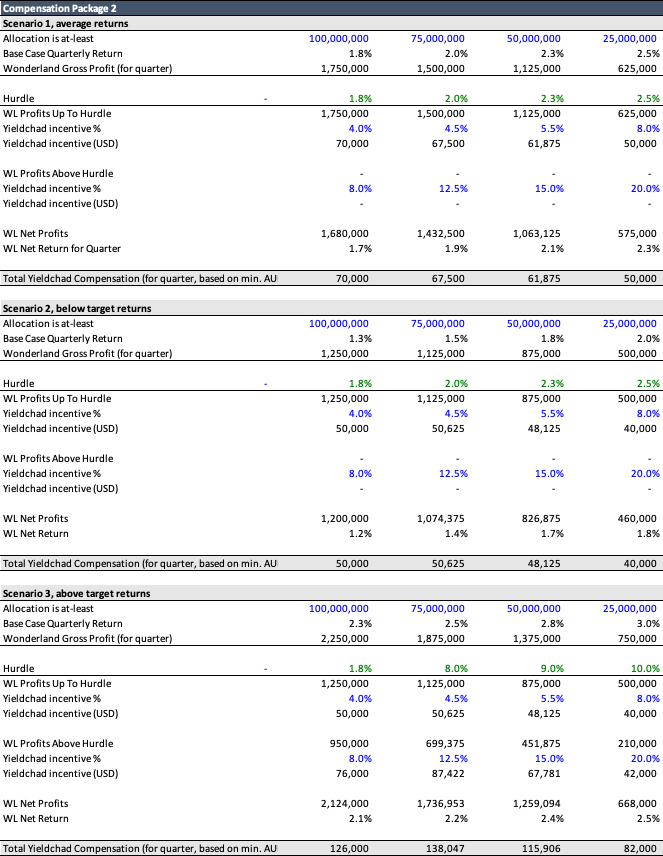 There are significant risks involved in cryptocurrency and decentralized finance investing. Thus this proposal includes risk disclaimers in order to better educate the community about risks faced by the WL Treasury:

Other
Yieldchad will provide the advisory consultancy services via a corporate entity owned solely by yieldchad.

This is a great way to lay out the purpose, expectations, and Incentivization’s of the treasury advisor role. I think keeping it as simple as possible while ensuring all bases are covered is a healthy approach to this specific situation.

From my understanding, the proposal promotes long term credibility in the Dao’s ability to manage it’s own assets and does not offer any dramatic shifts in the current structural state of Wonderland. I think the payment structure works in mutual benefit, and after this initial period there will be obvious ways to improve upon what is laid out here.

Because of our redemption fairs, I think an important area to focus on next would be bringing value to the holders, and how the success and wealth of those rewarded directly by the treasuries growth can be transferred to the Dao over time as well as the broader community of contributors to promote demand and active participation on a consistent and evolving basis.

Great proposal and points all round. Maturity and sanity, steady and steady, lets go and grow.

The proposal to Appoint yieldchad as Treasury Advisor did not pass, with only 43.3% of votes in favor.
https://wl-l.ink/Snapshot/WIP-20