I propose to allocate a portion of the treasury to a hedged GLP strategy in order to generate market neutral returns for wMemo holders. 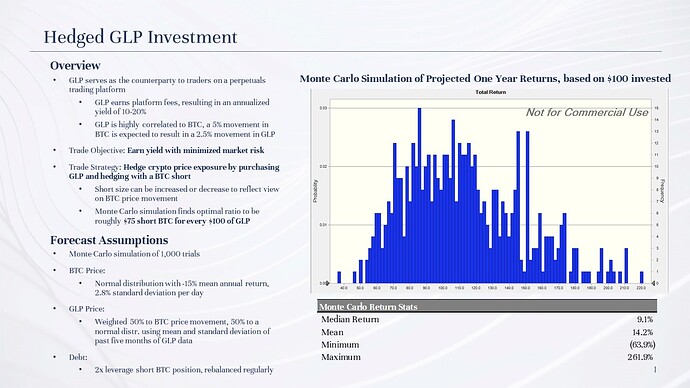 This is something we have talking about in discord a lot it would be great to have and all but we wont have someone to manage it.

Also is a hedge completely necessary?

I would personally vote against this investment if it were not hedged. Hedging risk is key in this market.

Fair enough, just curious what it would look like

Am GLP holder personally, so I obviously think this is good. I am all for it.
Why Arbitrum though? Wouldn’t it just be easier for us to be on avax, since we’re avax native?

Also, let’s pick up one of the NFT’s.

I don’t like the AVAX exposure in avalanche GLP, too volatile.

Also I think Arbitrum odyssey will fuel trading fees on Arbitrum in the near term. Long term, Arbitrum is lower fees and faster than avalanche and so should have higher fees for GLP.

Glad someone finally took the initiative on this. There is a similar DAO discussion from Tika Marsalas, and GLP seemed to have significant support based on the informal votes. I think a hedged position would be great and we can slowly adjust the hedge as the market turns more bullish. We need to be looking at more hedged/delta neutral farming strategies right now in this market. Given GLP is roughly 50% directional I think we could reasonably expect a 15-20% minimum annual return (including the hedged capital)–although GLP does fluctuate a bit from 30-40% APR (on AVAX chain)…after including the hedged capital were looking at another 33% decrease in returns if you hedge the directional portion of GLP (roughly 50%) at a 1:1 ratio using a non-leveraged hedge. Probably worth it given we have potential further downside risk in the market.

FYI: Arbitrum yields have recently nuked…avax is more than double. To me GLP on avax seems like a better option. I assume you ran your model through Arbitrum (for GLP), if you run it through Avax do you get a similar rate of return? Also, does your concern regarding the volatility of Avax really matter that much if you’re hedging at a near equal rate to the directional allocation of GLP. Wouldn’t the higher ROI of GLP on Avax outweigh the volatility risk?

Edit: I see your advocating for a 75:100 short vs GLP ratio allocation after reading it again and looking at your simulation model. I think this is fine but we will likely need to adjust once market corrects.

The risk of invest into GLP is mainly SC & governance risk instead of price volatility. The latter can be easily hedged by literally shorting (spot or perp) AVAX as it is normally the most volatile assets among the others while the former cannot be hedged.

If wonderland want to go big on GLP, i think it to equally important to acquire certain share of governance power (by purchasing GMX) to safeguard the investment.

I prefer AVAX to ARBITRUM, because of the following reasons:

I’m going to play the bad guy since no one else wants to and it’s important imo. In this model you assume that BTC will on average decrease by 15% annually. Will you show us the results with other market assumptions (both mean and volatility)? Modeling out only 1 BTC assumption seems extreeeeeemely bad (even if Monte Carlo sims have varying results). 15% is a rather tame move for a crypto, I’d like to see a more comprehensive reporting.

Additionally, since the median return is 9% that means the 14% average is being skewed by a few extremely high return scenarios. In fact, there seems to be a 30+% probability this strategy loses money. This begs the question, why would this strategy be preferable to just farming in pure stables?

I agree, the strategy as outlined may not be worth the risk in comparison to just farming stables if you only expect a 9% return on Arbitrum. At that point I think Avax GLP is a much better option–and I think I can safely make the assumption that Sifu feels the same given his own portfolio is GLP on AVAX. My question to you is why are you evaluating the long-term benefits of Arbitrum regarding this investment? If avax is more profitable in the here and now, why not invest on that chain and if Arbitum is more profitable later we can switch chains? If were dumping the Avax weekly for stables and hedging the volatility your concerns don’t seem valid. Maybe you can provide some clarification here…

I made an assumption that Arbitrum odyssey would increase the trading fees for GLP on Arbitrum relative to Avalanche.

Great points and thank you for looking into the literature closely.

The reason the strategy has a 30% probability of losing money is likely due to the very high std. deviation of daily bitcoin returns. My computer is not very fast and so I ran about 50 trials using 300 samples each trial. If I ran more samples or removed the outliers, I believe we would get a higher probability of positive returns.

Not sure that only 9% returns merits the risk, agree with you there.

This topic was automatically closed 7 days after the last reply. New replies are no longer allowed.