ILLUSTRATION ONE: Investing in $GLP on the GMX platform

Wonderland DAO votes in a snapshot in the affirmative, to deploy some of its capital to yield farming $GLP on GMX, where $GLP is akin to tricrypto, with different mechanism for generating yield, as well as different smart contract and platform risk.

Frontrun Risk: There is little to no slippage when minting $GLP, and there is little scope for such a transaction being frontrun.

Investment Risk: Given the general risk-profile of GMX’s founders, smart contracts, and $GLP’s track record, there is likely to be little reason to believe the investment would cause more harm than say, holding BTC and ETH. One potential argument against this lies with the notion that if BTC/ETH/AVAX fall in value at the same time as a grey swan event where several large shorts are closed on GMX, $GLP could lose significant value.

Multisig Discretion: If the risks are not deemed significant enough to warrant defying or delaying the DAO vote, the multisig should proceed to work out the details of executing the investment. If the multisig makes a decision here that is deemed “unreasonable”, short of changing the multisig the DAO has little recourse – but this is applicable to any area where the multisig has some discretion.

ILLUSTRATION TWO: Investing in $rDPX on the Dopex platform

Wonderland DAO votes in a snapshot in the affirmative, to take a position in $rDPX, a token from the Dopex ecosystem on Arbitrum network. $rDPX is a highly speculative investment in the future of Dopex and Dopex’s future native-stablecoin, synthetic assets and options-strategies. Any such proposal to invest in $rDPX should carry with it significant analysis into the various risks associated with Dopex and $rDPX’s future, in order to equip both voters and the multisig with sufficient facts to do further research and make a final decision.

Frontrun Risk: There is significant risk of being frontrun given that liquidity for $rDPX is on-chain and lower than $10m. If Wonderland transfers some of its funds to Arbitrum without obfuscating the transaction through a CEX, frontrunners could drive the price of $rDPX up before Wonderland takes a position in it. This can be somewhat avoided through (1) the multisig executing the purchase on a private-timeline (2) through a private EOA (3) at a preset price-range and (4) by DCAing, similar to how SkyH’s buyback bot operates. Alternatively, an OTC transaction with Dopex or large holders of $rDPX can be arranged as well, at a fairly negotiated price.

Investment Risk: Given the speculative nature of $rDPX as well as the relative nascence of Dopex and of on-chain options platforms in general, the investment carries significant risk. However, Wonderland is not new to investing in startups, and this risk should simply be factored in to moderating the size of the position in $rDPX as well as the target price-range. This risk should also warrant closer analysis of the team, past performance, market conditions, etcetera.

Multisig Discretion: Similar to the previous illustration, upon considering the above risks as well as any other salient risks, the Multisig should work out the details of execution.

Investing in $GLP on GMX 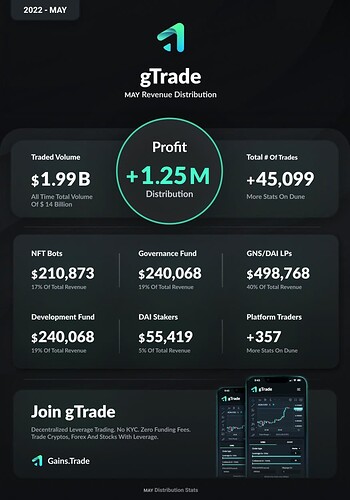 Wonderland should authorize investments in one or more of the following:

I like this proposal, but I think we need to work on creating a governance/delegation process for these types of investments first. I think we should create a proposal that merges your idea with mine (emergency DAO measures—a work in progress). We would have a team delegated and determined by the DAO to make decisions regarding treasury management and other short-term time-sensitive decisions. These ideas would then go directly to snapshot for voting. It is simply not sensible or feasible to make investment decisions based on a month long process, as the investment thesis can change very quickly in crypto.

Regarding the specific investments made, I’m a big fan of GLP and been pushing for it for months. Not a proponent of Temple (or Frax). GNS I don’t really know enough about to make a judgment, but it is on Polygon/Matic network. I’m not really bullish on that chain, as the Eth 2.0 move and the bearishness of the overall crypto market really seem to be working against the utility of the Matic chain IMHO. Therefore, I’m only in favor of adding GLP to the treasury. Preferably with some hedging in place to mitigate directional risk, although this will be difficult to manage without an active TM.

I’m not sure this would ever work out. How would you determine the team? Anyone managing our treasury should have some good credentials.

I’m against this proposal. Mainly due to what @Deal4412 mentioned. We need governance in place.

Someone better get something in place before this becomes wondercadabra

Maybe we can just advance the GLP portion to RFC since there seems to be support for it. I think a 5% allocation of the treasury to GLP would be awesome, perhaps we can replace some of the existing directionals with GLP (which has directional exposure to AVAX, BTC, and ETH).

Apologies for the delayed response, I’ve been down with viral fever the last week (not COVID tho) and sleeping 20 hours a day.

I agree with the impetus behind your Emergency DAO measures proposal, though I think the optimal solution involves vote delegation so that a core group of vote delegates can control 10x their wMEMO in voting power (retain some proportional skin in the game) and make the optimal decisions for tokenholder value (especially since the broader goals of wonderland are not yet set, other than maximizing tokenholder value).

I think your solution involving relying on a vote by paid moderators (or Nal X’s TM-based governance proposals) is fine too in the interim, though I ultimately believe that something akin to representative democracy works best both in terms of speed and aligning interests, while still decentralizing power across enough independent people. (Though Sifu could just as easily buy up a ton of wMEMO and convince a lot of frogs to delegate him a bunch of voting power, then use that delegated power to buy up 100m of SIFU tokens… so I admit this isn’t foolproof either.)

In any case, I think I’ll take your advice and move forward with a GLP RFC (and I’ll keep my RFC way shorter so it gets a bit more engagement). At least for GLP there’s no rush since we can’t be frontrun and GMX is relatively stable/unlikely that the opportunity will change or disappear. So I won’t need to merge our proposals just yet.