Simply ending the meaningless rebases that are just stock splits and mislead investors.

use the - addRecipiet function, with these 2 arguments -

This should stop rebases if I understand it all correctly. if developers know better then they can do it their way.

i approve this message

My friend wanted to add a comment on this topic: 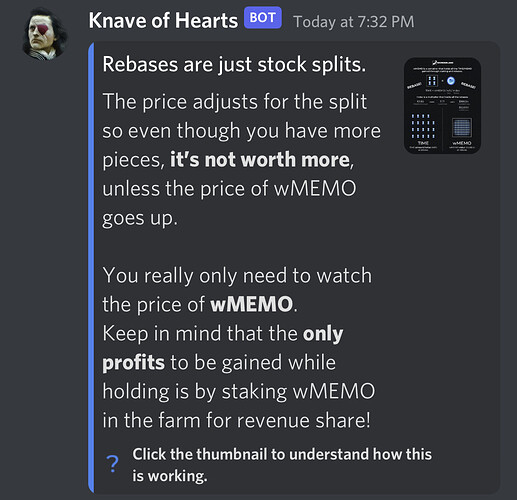 This is my message and I approve it

This knave is a smart guy, maybe I could take him out for a beer

I also approve this message.

My name is The Ferengi and I approve this message

Stop the rebase…if I have to see Knave explain rebases one more time I’m gonna lose my mind! Rebases are not profitable but simply serve to confuse and mislead people.

You have to take Farm Boy along with him as he is Knave’s legal guardian.

I’m very intrigued to know whether this would work. It seems like a plausible scenario. I’ve always been under the impression that the contract was not able to be changed in this way but I think you’re on to something. I did some digging and found a very weird, super Sus, although admittedly potentially informative reference that explains pieces of Our contract code, including the distributor contract.

This breakdown of Our Wonderland Code (which is actually a copy of OHM, go figure) comes from a breakdown of what appears to be a Different project’s codebase galled Galaxy Google - but they never managed to change the contract titles so it’s still Time and Memories contracts.

This makes me feel the explanations of the contract pieces could also be flawed, but with my limited understanding it sounds accurate to me.

If I understand it correctly, there should be an authorized wallet address out there that’s capable of making this alteration as you describe it. Managing the public outreach campaign that we’d kinda need to do before we pulled that plug is not something I’m fond of imagining atm, but even that doesn’t irk me more than the thought of rebases continuing. I’m definitely for this, but would like to see it implemented with care - not just burn it down and sweep the ashes under the rug.

Contracts are immutable but parameters/variables can be changed.

Can write to contracts to change internal states

You smart hooman. So much yes to this.

• What are the implications of turning off rebases without sufficient notice that reached the holder’s of nearly 1800 wMemo worth of Memo out there? Close to 30% of the circulating supply.

• Do we know if there is a function within the wMemo contract that would stop the rise in Memo : wMemo ratio, ensuring those who have yet to wrap do not face challenges transitioning equitably after the change is made?

• Would it be feasible to send some kind of notice to token holders wallets, like an airdrop?

There was a moment when masterofdisaster.eth (or an ENS with a similar name) got a TX during the Wind Down Wonderland vote, and within that TX was a message asking to buy them out. I know this probably sounds ridiculous but maybe it’s possible to do something along these lines. Maybe use an NFT to send a notice, could be a cool way to start alpha newsletter types things if it’s cheap enough to implement.

Yes do it, get more tokens for the revenue sharing vault and stop rebases! Our treasury is filled with a good amount! Create more strategies!

I am not aware of all technicality and/or implication but it would be great.

Reducing the reward rate of rebases, effectively turning them off will have no effect on the ability to wrap MEMO. People will still be able to stake TIME however it will not rebase.

As for letting people know that don’t really stay in the loop - I think it will just be a slow process informing people who aren’t aware, but the usual tweets/ discord announcements should inform a lot of people.